ِArmy Abducts A Palestinian From Hebron 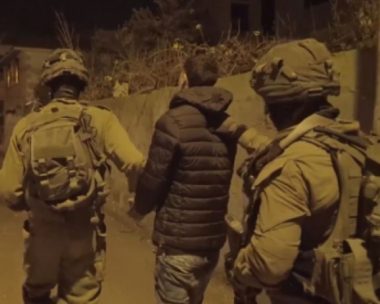 Israeli soldiers abducted, on Monday afternoon, a young Palestinian man from Beit Ummar town, north of Hebron, in the southern part of the occupied West Bank.

The soldiers abducted the Palestinian, identified as Mohammad Khaled ‘Aadi, 19, after interrogating him in Etzion military base and security center, north of Hebron.

It is worth mentioning that the Palestinian was summoned for interrogation last week, after the soldiers invaded his home, at dawn, and violently searched it.

On Monday at dawn, the soldiers abducted fourteen Palestinian in the occupied West Bank, including nine who were taken prisoner from their homes in Hebron.

On Monday afternoon, the soldiers killed a young Palestinian man with live fire, east of Khan Younis, in the southern part of the Gaza Strip.