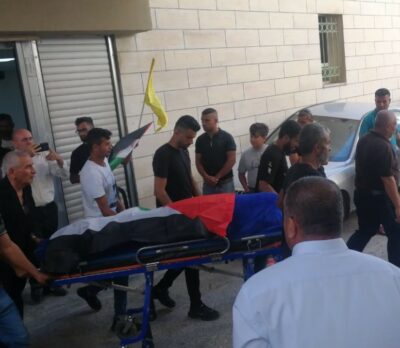 On Thursday, hundreds of Palestinians marched in the funeral procession and ceremony of a Palestinian woman who died in Israeli prisons 41 days earlier due to medical neglect and mistreatment by the Israeli occupation authorities. Israel initially refused to release her corpse.

The woman, Sa’diyya Farajallah, 68, from Ethna town west of the southern West Bank city of Hebron, died on July 2, 2022, less than seven months after Israeli soldiers abducted her.

The married mother of eight was the oldest female detainee imprisoned by Israel and was subject to medical neglect while in prison.

The Israeli army transferred her corpse to the Palestinian side at the Tarqoumia terminal near Hebron before Red Crescent medics moved her to the Al-Ahli Hospital in Hebron, where specialists examined her body before being released to her family. The funeral procession started in front of the hospital before heading to her town, holding the funeral ceremony at the local mosque and then burying her at the Shuhada graveyard in the center of Ethna.

Her family held Israel accountable for her death, especially since she was denied access to medical attention and her medications and called on the International Community to act and help save the lives of the Palestinian detainees, especially the ones holding extended hunger strikes demanding an end to their arbitrary Administrative Detention without charges or trial. Sa’diyya died at the Damoun Israeli prison after eight months of imprisonment, including two months in solitary confinement, despite her health and chronic conditions.

She was abducted on December 18, 2021, near the Ibrahimi Mosque after illegal Israeli colonizers assaulted her and hurled insults at her before a female Israeli soldier fired some rounds in her direction and abducted her.