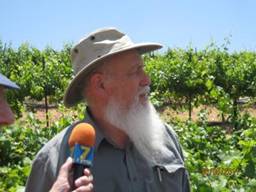 An Israeli settler who was released early from a life sentence for killing 3 Palestinians in 1983 has received compensation of 1.3 million NIS (around $250,000) from the Israeli Tax Authority for alleged damage to land that he has cultivated in the Hebron area – land that he illegally confiscated from its Palestinian owners.Menachem Livni is a settler in the ultra-right wing settlement of Kiryat Arba, in the Palestinian city of Hebron, and says that he is entitled to the payments, and will continue to sue the Israeli government for more money.

Livni was convicted of the murder of three Palestinian students, and the wounding of 33 others, when he and two other right-wing settlers with the so-called ‘Israeli Underground’ threw hand grenades and fired automatic weapons at the Islamic College of Hebron in 1983.

He was sentenced to life in prison along with the other perpetrators of the attack, Shaul Nir and Uzi Sharbav, but he received an early release when he was pardoned by Israeli President Chaim Herzog in 1990.

He immediately moved to the Israeli settlement Kiryat Arba, which soon became known for violent attacks against Palestinians and illegal seizure of Palestinian land.

Livni himself took over a large swath of Palestinian farmland and began growing fruit. He was provided with his own contingent of Israeli military troops to protect his stolen swath of land from the Palestinian owners, who repeatedly attempted to reclaim it.

According to Livni, he had a lease on the land from the Israeli Settlement Authority. He told the Israeli paper Ha’aretz, “I am on the land with a permit and I have invested a lot of money in it. I want to renew the contract and there is an argument with the administration about whether the contract will be with the Settlement Department [of the Jewish Agency] or with me personally.”

But according to the Israeli government, any permit that may have existed expired in 2004. But the payments to Livni from the Israeli Tax Agency continued until at least 2009.

And the convicted murderer is continuing to demand more compensation from the Israeli government for alleged damage to the land he took over from its Palestinian owners.