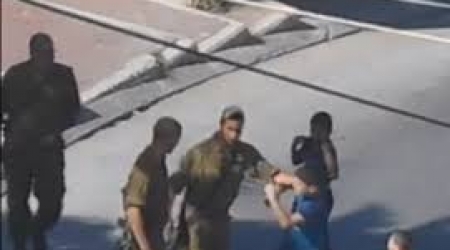 Israeli Haaretz newspaper unveiled, Thursday morning, that an Israeli soldier pointed his gun at a handcuffed Palestinian boy, during an investigation after arresting him in Nabi Saleh village, near the West Bank city of Ramallah.(Al Ray) The newspaper pointed out that Israeli forces arrested four boys from Nabi Saleh village three weeks ago, under the pretext of throwing stones. He was led to Benjamin police station for investigation.

There, one of the soldiers who participated in the arrest attended, and was filmed while directing his gun towards the boy in the interrogation room. The soldier left the room after investigation officers arrived, the newspaper added.

It was noted, by the court, that the documentation of the stone-throwing incident is not professional, and that the boys’ identities are in doubt.