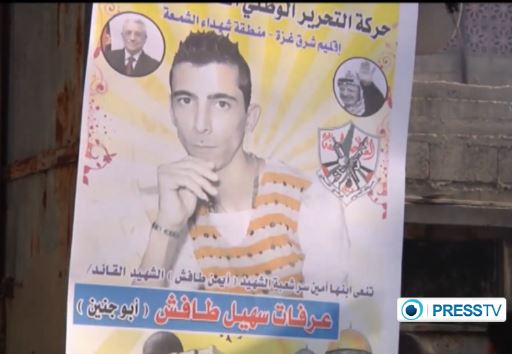 Palestinian medical sources in occupied East Jerusalem have reported that a young man died, on Friday, of wounds suffered during the latest Israeli onslaught on the besieged Gaza Strip.The man, identified as Arafat Soheil Tafesh, succumbed to his wounds at the al-Maqassed Charitable Islamic Hospital in East Jerusalem.

His father told a Press TV correspondent in Gaza that around 200 Palestinians were also injured in the Tuffah neighborhood of Gaza when his son was wounded, after the army bombarded it.

The father said his son was first moved to the Shifa Hospital in Gaza, where the doctors operated on him for several hours, and that the hospital had already been flooded with dozens of wounded Palestinians.

Following a successful resuscitation, the young man’s condition deteriorated again, and he fell into a coma before he was eventually moved to al-Maqassed Hospital, where he died of his wounds.

The father said that he was walking home with his sons, Arafat and Ammar, who were both wounded in the Israeli bombardment when Arafat suffered a very serious injury, and bled heavily before the medics managed to enter the heavily bombarded neighborhood.

The Ministry of Health in Gaza said that around 2140 Palestinians, including 577 children, were killed in the Israeli onslaught. Over 11,100 others, including 3,374 children, 2,088 women and 410 elderly people were injured.