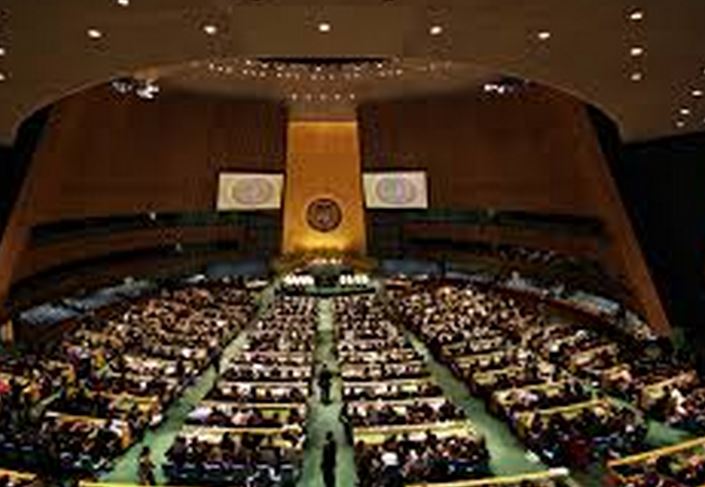 The United Nations General Assembly passed on Thursday, by an overwhelming majority, a resolution recognizing the Palestinian legitimate right to Self-Determination, including the right to an independent Palestinian State.180 countries voted for the resolution, while only seven states, including the United States and Israel, voted against it.

Permanent Palestinian Observer at the United Nations in New York, Riyad Mansour, said the vote is a continuation and strong affirmation of the international support for the legitimate rights of the Palestinian people, led by their right to self-determination and liberation.

He added that the resolution urged all countries, and all related international and UN institutions, to continue their support for the Palestinian people, and to help them in achieving their independence as soon as possible.

The General Assembly affirmed the “urgent need to resume and speed the political process in the Middle East,” based on all related resolutions and agreements, including the Land for Peace principle, the Arab Peace Initiative, and the Roadmap Peace Plan, in order to reach a comprehensive peace agreement based on the two-state solution.

The resolution also referred to the July 9, 2004 International Court’s Advisory Opinion regarding the legal consequences of the Israel Annexation Wall in the West Bank, in which it rendered its opinion by fourteen to one votes, stating:

“The construction of the Wall being built by Israel, the occupying Power, in the Occupied Palestinian Territory, including in and around East Jerusalem, and its associated régime, are contrary to international law.” http://www.icj-cij.org/docket/index.php?pr=71&code=mwp&…&p3=6

On November 29 2012, the General Assembly passed an overwhelming vote granting Palestine a Non-Member Observer State Status in the United Nations. The draft resolution passed by 138 votes, while nine countries voted against it and 41 abstained.

The countries that voted against the resolution were the United States, Israel, Canada, Marshal Islands, Micronesia, Nauru, Palau, Czech Republic and Panama. http://www.un.org/press/en/2012/ga11317.doc.htm