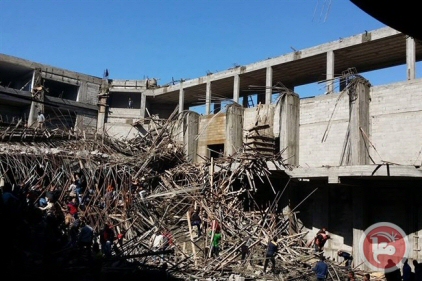 At least 21 people were injured on Monday, after a ceiling collapsed, in a building under construction, at a university campus in the southern Gaza Strip, a Gaza civil defense service spokesman said.Mohammad al-Midana said, according to Ma’an, that the ceiling collapsed during construction work.

Sources in the Gaza civil defense rescue service said that both students of al-Aqsa University’s Khan Yunis branch and workers were among the wounded. At least 12 of the injured were taken to Nasser medical center in Khan Younis, while rescue teams were evacuating the others.

The Gaza Strip has been under a crippling Israeli blockade since 2007, which has severely impaired the construction sector in the Palestinian enclave, as building materials are hard to come by.

The World Bank, on Thursday, highlighted the “extremely difficult” situation in the Gaza Strip, which it said has only received six percent of the funding it needs to recover from the latest devastating Israeli offensive on the besieged territory in 2014.