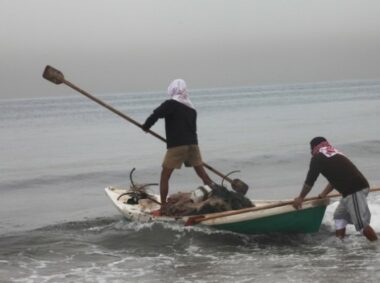 The Al-Mezan Center For Human Rights issued a statement denouncing the Israeli Navy’s abduction of six Palestinian fishermen, the confiscation of two boats in the southern part of the Gaza Strip, and the escalating Israeli violations against the fishermen in the besieged coastal region.

Al-Mezan stated that the fishermen from the Gaza district were abducted, and their two boats were confiscated before they were taken to an unknown destination.

It added that the Navy constantly attacks the fishermen and their boats deliberately to cause harm and damage, especially since the Navy uses automatic live fire to attack the boats.

Al-Mezan denounced the escalating Israeli violations and called on the International Community to intervene and act to end the illegal Israeli siege on the coastal region.

Field searches and documentation by Al-Mezan revealed that the Israeli Navy carried out 441 violations against the Palestinian fishermen since the beginning of this year and abducted 64 fishermen, including eight children, in addition to shooting 21, including three children, and confiscating 23 fishing boats.

It called on the International Community to act and perform its duties in adhering to International Law and providing protection to the Palestinian civilians and to act on prosecuting the violators of their treaties, and on ending the deadly siege on Gaza.