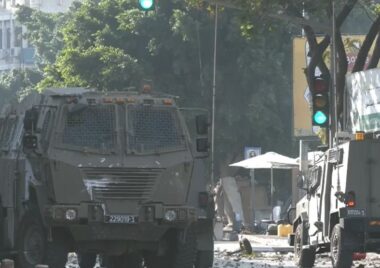 On Tuesday dawn, Israeli soldiers abducted three Palestinians from their homes in Bethlehem, Hebron, Tulkarem, and Nablus, in the occupied West Bank, and shot at least thirteen Palestinians in Nablus.

In Husan village, west of Bethlehem, the soldiers invaded and searched a few homes and abducted Mohammad Amjad Za’oul.

The soldiers also invaded many neighborhoods in Hebron city, in the southern part of the occupied West Bank, in addition to Beit Ummar town and the al-‘Arroub refugee camp, north of Hebron, leading to protests before the army fired live rounds, rubber-coated steel bullets, and gas bombs.

In Tulkarem, in the northern West Bank, the soldiers abducted an engineer, Abdul-Rahman Odah, from his home in the Ezbet al-Jarad area.

In addition, the soldiers invaded Asira al-Qibliyya village, south of Nablus in the northern West Bank, and searched several homes.

Palestinian resistance fighters exchanged fire with the dozens of soldiers who invaded Askar al-Balad, prompting the army to withdraw due to the intensity of gunfire.

Protests and exchanges of fire also took place in the eastern neighborhood of the Old City of Nablus after the army surrounded a building before firing shoulder-launched rockets at a Palestinian home.

Medical sources said the soldiers shot eleven Palestinians with live fire, and added that one woman was among the injured, in addition to two Palestinians who were shot with rubber-coated steel bullets.

At least one of the wounded Palestinians, who was shot in the abdomen area, is in a critical condition.

The sources added that the seriously wounded young man was rushed to surgery and described his condition as “extremely serious.”

They stated that the soldiers attacked ambulances and medics, preventing them from reaching some of the wounded, especially in the Old City.

It is worth mentioning that the invasion of Nablus city is still ongoing, especially in Faisal Street, Shuhada Street, Old city, and several areas after the soldiers surrounded and isolated them, and more troops were being pushed into the area.

The Israeli army said its soldiers are surrounding a building in an attempt to abduct what it called a “wanted young man.”

On Monday night, several army jeeps invaded Sebastia Palestinian town northwest of Nablus and fired a barrage of live rounds to force the Palestinians to return to their homes.