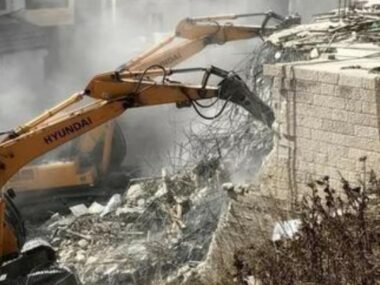 On Monday, Israeli soldiers demolished a Palestinian house and a hothouse, in Jabal al-Mokabber and the al-Isawiya towns, in occupied Jerusalem, in the West Bank.

Local sources said the soldiers invaded Jabal al-Mokabber before demolishing the house of Omar Fahed Ja’afra, allegedly for being built without a permit.

During the demolition, the soldiers attacked several Palestinians and abducted two young men before moving them to an unknown destination.

The soldiers also invaded the al-Isawiya town in Jerusalem and demolished a hothouse owned by Rafat Tareq.