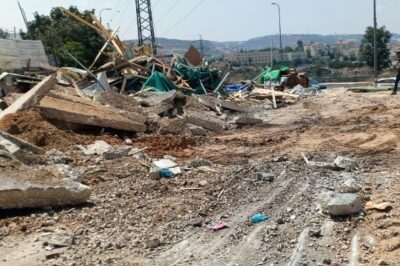 On Wednesday, Israeli soldiers demolished a store for selling wood in Husan village, west of Bethlehem, in the occupied West Bank.

Rami Hamamra, the head of Husan Village Council, said the soldiers, accompanied by a bulldozer, invaded the western area of the village and demolished the shop owned by Mahmoud Ahmad Sabateen.

Hamamra added that the army alleged the store, licensed by the local council, did not receive a permit from the so-called “Civil Administration Office,” the administrative branch of the illegal Israeli occupation.

It is worth mentioning that the shops and stores in the western area of Husan are subject to frequent Israeli violations, and many have already been demolished because they are “not far from Beitar Illit” legal colony, built in violations of International Law and the Fourth Geneva Convention.

Also, the soldiers demolished a residential shed and handed orders targeting a barn and four sheds near Jericho, in the northeastern West Bank.