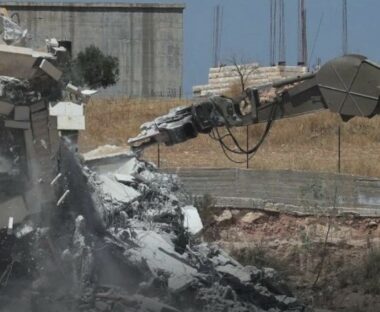 On Thursday, Israeli soldiers demolished the homes of two Palestinian siblings in Ramadin town, southwest of Hebron, in the southern part of the occupied West Bank.

Zidan Zagharna said several military vehicles, including bulldozers, invaded the Wadi Al-Khalil area in Ramadin before storming the homes of two of his sons, Salah and Ezzeddin, and forcing them along with their families out.

The army claims the homes, licensed by the local council, did not receive permits from the so-called “Civil Administration Office,” the administrative branch of the illegal Israeli occupation, because they are located in Area C of the occupied West Bank.

Area C: The United Nations Office for the Coordination of Humanitarian Affairs (OCHA): Over 60 percent of the West Bank is considered Area C, where Israel retains near exclusive control, including over law enforcement, planning, and construction. Most of Area C has been allocated for the benefit of Israeli settlements or the Israeli military at the expense of Palestinian communities.

This impedes the development of adequate housing, infrastructure, and livelihoods in Palestinian communities and has significant consequences for the entire West Bank population.

Structures built without permits are regularly served with demolition orders, creating chronic uncertainty and threat, and encouraging people to leave. Where the orders are implemented, they have resulted in displacement and disruption of livelihoods, the entrenchment of poverty and increased aid dependency.