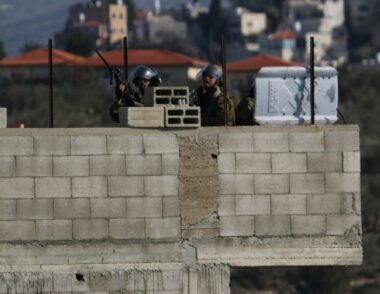 Media sources said the Palestinians marched from the center of the village before the soldiers attacked them with a barrage of rubber-coated steel bullets, gas bombs, and concussion grenades.

They added that six Palestinians were shot with rubber-coated steel bullets, and dozens suffered the effects of tear gas inhalation.

It is worth mentioning that the soldiers invaded homes and occupied rooftops to use them as firing posts.

In related news, the soldiers abducted a young man, and fired gas bombs, concussion grenades, and rubber-coated steel bullets, at Palestinian protesters in the center of Hebron city, in the southern part of the West Bank.

On Friday at dawn, the soldiers abducted Mousa Osama Tawafsha from his home in Sinjel town, north of the central West Bank city of Ramallah, and Ja’far Abdullah al-‘Orouj from his home in Janata town, east of Bethlehem.