Army Injures Several Palestinians, Abducts One, And Detonates A home In Jenin 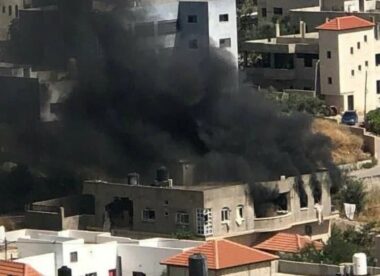 The Israeli army withdrew from Jenin in the northern West Bank after detonating a Palestinian home, leading to protests and exchanges of fire with Palestinian resistance fighters.

Many army vehicles invaded Jenin at dawn before surrounding a home for the local Dab’ey family. The army abducted Mahmoud Dab’ey, and his brother, Anas.

The army then forced the family out before detonating the property after firing several shells at it.

The invasion and the demolition led to massive protests in the city before the soldiers shot at least thirteen young men with live ammunition.

Palestinian resistance fighters exchanged fire with the invading soldiers, wounding one officer from the Yamam brigades.

The soldiers also invaded and ransacked many homes before occupying rooftops to use them as sniper posts. The Palestinian Health Ministry has confirmed that the soldiers shot at least thirteen Palestinians with live fire, including two young men who suffered life-threatening wounds to the chest and abdomen.

One of the wounded Palestinians in Daoud Zobeidi, the brother of Zakariya Zobeidi, who was one of six detainees who managed to escape from the heavily fortified Gilboa Israeli prison before they were captured a week later.

It is worth mentioning that the soldiers abducted several Palestinians in various parts of the West Bank at dawn Friday.