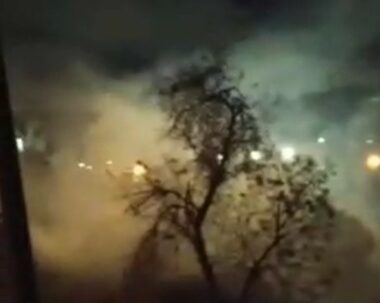 Israeli soldiers injured, on Sunday evening, several Palestinians in Burqa village, northwest of the northern West Bank city of Nablus, after the residents tried to defend themselves when a group of fanatic illegal Israeli colonizers invaded their village and attacked a home.

Ghassan Daghlas, a Palestinian official who monitors Israel’s illegal colonialist activities in the northern West Bank, said the colonizers invaded Burqa before attacking the home of Eyad Ragheb Salah in the western area of the village.

Daghlas added that the Palestinians intercepted the attack and gathered near the property to force the colonizers to leave before Israeli soldiers invaded the village and started firing gas bombs and rubber-coated steel bullets at the residents.

A young man was shot with rubber-coated steel bullets, and many Palestinians suffered the effects of tear gas inhalation, in addition to cuts and bruises.

Furthermore, the colonizers gathered on the main Jenin-Nablus road, not far from the village’s main road, and attacked many Palestinian cars, causing damage.