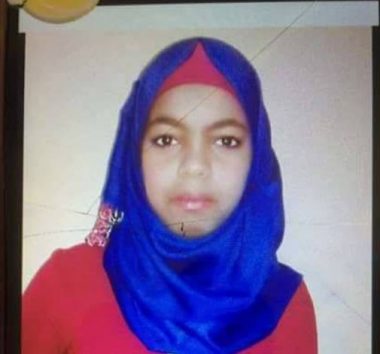 Update: On Friday at night, Israel transferred the corpse of Nawf Enfei’at, 16, to the Salem Israeli military roadblock, before being delivered to a Palestinian Red Crescent Ambulance.

The Red Crescent in said its medics have transferred her corpse to Khalil Suleiman governmental hospital, in Jenin city, in the northern part of the West Bank. Nawf was from Ya’bad town, southwest of Jenin.

She was seriously injured, Thursday, when the soldiers shot her, allegedly after she stabbed a soldier at the at a military roadblock near Mavo Dotan illegal Israeli colony, built on Palestinian lands, southwest of the northern West Bank city of Jenin.

She died from her serious wounds at an Israeli hosputal, on Friday morning.

Updated From:
Child Dies From Serious Wounds She Suffered Thursday
Published on: Jun 2, 2017 @ 12:32

The Palestinian Health Ministry has confirmed, Friday, that the Palestinian teenage girl, who was shot and seriously injured by Israeli army fire, on Thursday, has died from her wounds at an Israeli hospital.

The Ministry said the child, Nawf Eqab Enfei’at, 16, was from Ya’bad town, southwest of Jenin, in the northern part of the occupied West Bank.

The statement came after the Israeli Hillel Yaffe Medical Center in Hadera, where she was receiving treatment, announced that she succumbed to her wounds.

Nawf was shot, and seriously injured, at a military roadblock near Mavo Dotan illegal Israeli colony, built on Palestinian lands, southwest of the northern West Bank city of Jenin, reportedly after she stabbed a soldier.

Her father said the family was shocked to hear about her death, especially since her lawyer told them that the Israeli military prosecutor’s office has scheduled a court hearing for her, for this coming Sunday.

He added that the Israeli army did not contact the family, even to inform them about a date to transfer her corpse back to them.

The family was not allowed to visit with her after her injury, and only knew she suffered serious wounds.