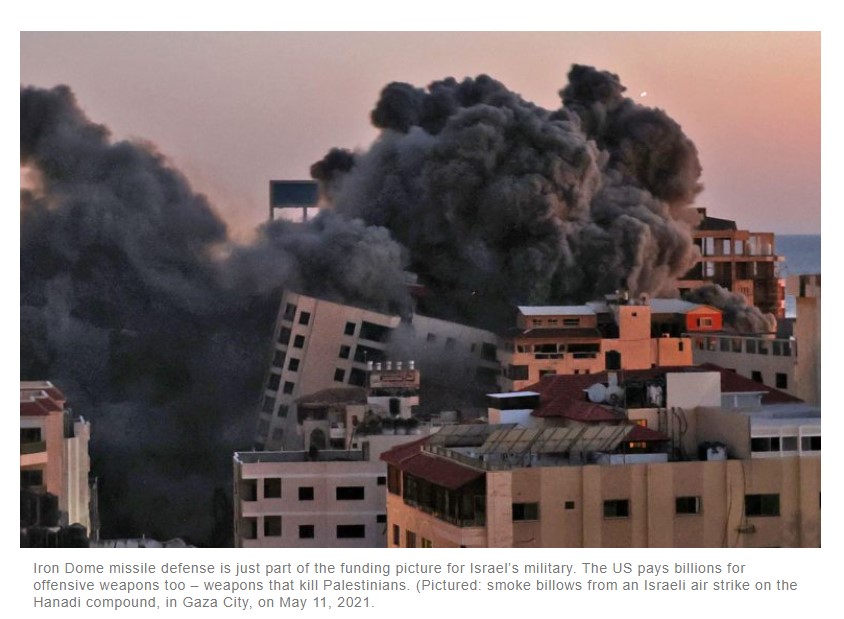 Israel partisans want a $1 billion handout from Congress on top of the almost $4 billion it already gets – but Israel spends American money recklessly and ruthlessly. Stop funding Iron Dome.

As Jewish News Syndicate reports, pro-Israel and certain (Zionist) Jewish organizations – and even some members of Congress – are “losing patience” with the Senate for dragging its feet on H.R. 5323, a $1 billion handout to re-arm Israel’s Iron Dome.

The Iron Dome missile defense system is the high-tech answer to Israel’s dilemma: how to continue breaking the spirits of the people of Gaza, all the while keeping Israelis safe when Gazans inevitably fight back.

Iron Dome is basically a giant flyswatter, smacking down the low-tech rockets that Palestinians in Gaza send toward Israel in protest of the now fifteen-year-old brutal blockade.

The blockade is purportedly in place to punish Gaza for raining down thousands of rockets on Israel by withholding necessities from the population as a whole – and to keep Gazans from obtaining materials to build more rockets.

But the rockets don’t stop because they are mostly made from everyday objects – pipes from street signs, stuffed with dried fertilizer, for example – and because Gazans are angry about the ongoing blockade.

After 15 years, the Gaza-Israel situation feels to many like a vicious cycle. Gazan resistance shoots rockets toward Israel, Israel entrenches the blockade (with an occasional all-out war – or as it is commonly known, mowing the grass”). Repeat.

After all, Israel’s pundits typically remark, “what would you do if your neighbor was launching rockets at you? You’d make them stop.”

They tell us, “Gazans shoot rockets because they hate Jews and will not stop fighting till they destroy them all.”

Under this assumption, subjugation makes sense. After all, you can’t allow people who want to wipe you off the face of the earth to walk around freely.

But is racism the reason for the rockets?

Gazans are not trying to destroy Jews. Gazans (and all Palestinian refugees) want their fundamental human rights –  including the right to live on their land that was taken from them. International law gives them the right to return from exile, but Israel refuses.

And so, not content to live under oppression, the people of Gaza resist their oppressors.

But can’t they just protest peacefully?

Palestinians have a heritage of nonviolent resistance – underreported because it is un-sensational, but covered in publications as diverse as Foreign Policy, Jewish Currents, the Carnegie Endowment for International Peace and the American Friends Service Committee (Quakers).

Some recent examples of nonviolent resistance:

Rockets are the method of choice for a people with few choices.

The first rocket from Gaza was launched on April 16, 2001 – after Israel had killed more than 570 Palestinians in 6 months.

By 2007, rockets had killed 10 Israelis. At that point, the Israeli government agreed it was time for a solution. Development of the Iron Dome missile defense system (and American funding) began.

Significantly, Israel’s solution did not include working with their adversary to address their complaints and develop a feasible and just peace plan.

So the rockets continue.

In the 20 years since Palestinians in Gaza began launching rockets, they have killed about 39 Israelis. In the same 20 years, Israeli airstrikes have killed over 4,000 Gazans.

It seems that Gaza is more in need of an infusion of self-defense cash than Israel.

In May 2021, Israel’s relentless oppression of Palestinians (see Timeline of Events here) provoked a barrage of rockets out of Gaza. Israel then further provoked its Palestinian neighbors by carrying out 1,500 airstrikes in 11 days on a poverty-stricken, dense population with no self-defense mechanism and poor medical facilities.

All the while, Israel’s population was protected by the Iron Dome – good news for Israeli citizens, but for Gazans it only meant that Israel could go on bombing indefinitely with little risk of casualties to its own population.

Even if the people of Gaza had bomb shelters, they probably couldn’t withstand Israel’s GBU-39 bombs, which can penetrate 3 feet of steel reinforced concrete, or its GBU-31 bombs, which can form a crater 50 feet wide, penetrate 11 feet of concrete, and spray lethal shrapnel to a radius of 400 yards.

The rockets that the people of Gaza build are, for the most part small and inexpensive, and may cost $100 apiece (others place the cost somewhat higher). Reliefweb indicates that about 4,000 were launched, for a total cost of $400,000.

The Iron Dome technology was developed by Israel and the US, with $1.6 billion in funding courtesy of American taxpayers. Congress has been pouring money into Israel’s missile defense since at least 2006, totaling about $6 billion.

This is on top of the $3.8 billion in military aid that the US gives Israel every year (over $108 billion since 1948, plus $34 billion in economic aid). USA Facts calculates the total, adjusted for inflation, at $243.9 billion. From any angle, Israel is by far the largest recipient of American foreign aid since World War II.

So although Palestinians were unable to protect themselves, and their own weapons were relatively unsophisticated and ineffectual, Israel ran 1,500 airstrikes, burning through high-priced, highly destructive bombs (GBU-39 and GBU-31 cost $40K and $28K apiece, respectively).

These bombs were dropped, often on residential areas, from fighter jets (like the F-35I Adir at a cost of $100+ million each) or shot from tanks (like the M109A5 self-propelled howitzer at $14 million each).

Another interesting factoid: during the May attack, Israel destroyed 40% of Hamas’ known rocket launchers – but, as Forbes reports, this “did not reduce the daily number of rockets fired by Hamas.”

Last May, Israel squandered hundreds of millions of (American) dollars in weapons and ammunition, against an adversary with next to zero military capability.

This adversary has tried to achieve their goals through non-violent means, but to no avail; even the “violence” of rockets is relatively non-violent.

Israel’s aggression, expensive and deadly as it was, did not diminish its adversary’s capabilities.

And now, Israel has come to the US for an extra $1 billion handout – and Israel’s supporters are tired of waiting.

Is it time for Americans to wake up to the fact that Israeli wars are a waste of our money – and to make a genuine effort to find a just solution?