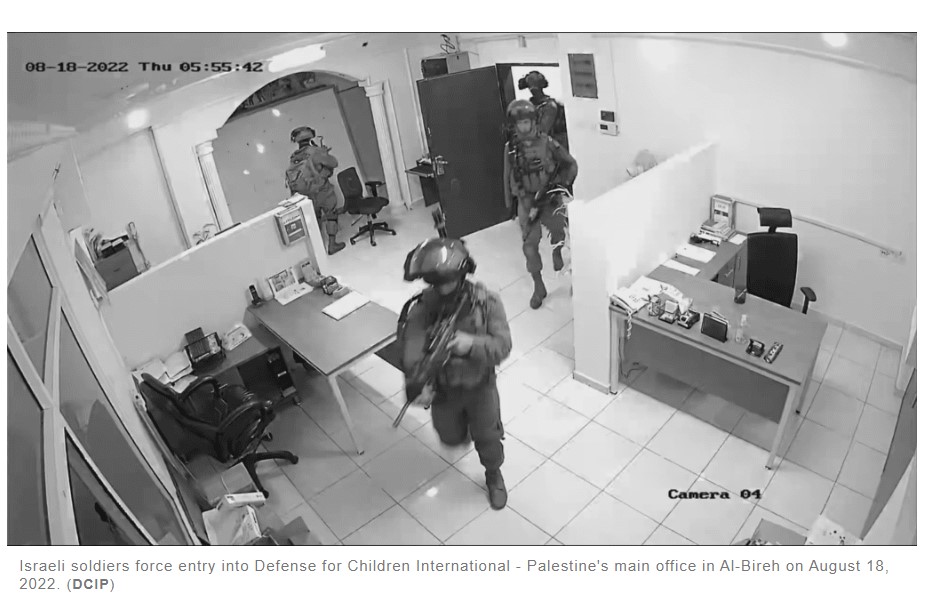 As a continuation of its targeting of select Palestinian NGOs, Israeli forces raided, ransacked, confiscated materials, and welded shut their office doors. The raid was part of a series of early morning raids against six prominent Palestinian human rights and civil society organizations

They exited the office after 45 minutes, welding shut the entry door and leaving a notice taped to the door ordering the office closed declaring DCIP an illegal organization. It is unclear exactly what items were confiscated.

“Our human rights documentation and evidence-based advocacy exposing Israeli forces’ grave violations against Palestinian children has made us a target of the Israeli government for years,” said Khaled Quzmar, General Director at DCIP. “Sealing and closing our office will not silence us. We reject the Israeli designation and any repressive tactics aimed at eliminating our work and urge the international community to robustly denounce this serious escalation against Palestinian human rights defenders.”

Video surveillance footage from inside the DCIP office shows Israeli forces entering the premises at 5:55 a.m. The Israeli soldiers move through the DCIP office inspecting, gathering, and removing random items and files, and then they exit at 6:40 a.m. They welded the door shut and taped a military order to the door effectively closing the DCIP office.

The raid on the DCIP office was part of a series of early morning raids against the six prominent Palestinian human rights and civil society organizations criminalized by Israeli authorities in October 2021, including Addameer, Al-Haq, DCIP, the Union of Agricultural Work Committees, the Bisan Center for Research and Development, and the Union of Palestinian Women Committees.

Israeli Minister of Defense, Benny Gantz, designated the six Palestinian human rights and civil society groups as “terrorist organizations” on October 19, 2021, pursuant to a 2016 Israeli law, a designation that effectively criminalizes the activities of these organizations and authorizes Israeli authorities to close their offices, seize their assets, and arrest and jail their staff members.

In July, Belgium, Denmark, France, Germany, Ireland, Italy, the Netherlands, Spain and Sweden released a joint statement on the Israeli designations stating that “no substantial information was received from Israel that would justify reviewing our policy towards the six Palestinian NGOs on the basis of the Israeli decision to designate these NGOs as ‘terrorist organizations.” The nine countries declared, “in the absence of such evidence, we will continue our cooperation and strong support for the civil society in the oPT.”

The letter, addressed to Secretary of State Antony J. Blinken and Director of National Intelligence Avril Haines, calls on the Biden administration to publicly reject the Israeli designation, urge the Israeli government to reverse its decision, and confirm a date for an inter-agency briefing and provide a report to Congress within 30 days.

In February, DCIP joined other leading Palestinian human rights and civil society organizations to file a procedural objection to the decision by Israeli military authorities declaring DCIP and other groups “unlawful associations.”

It emphasizes that the Israeli authorities’ declaration amounts to a blatant and serious violation of international law, including denial of due process and fair trial guarantees by relying on alleged “secret evidence” in Israeli military courts that are neither independent nor impartial.

Government and United Nations officials, including human rights experts, have condemned the designation and called upon Israeli authorities to reverse the designation immediately and cease efforts to criminalize human rights work. Many solidarity statements have been issued by trade unions, academics, editorial boards, human rights and development organizations, celebrities and artists, and individuals.

Israeli paramilitary border police forces previously raided DCIP’s headquarters on July 29, 2021. More than a dozen Israeli soldiers forced open the office’s locked front door and confiscated six desktop computers, two laptops, hard drives, and client files related to Palestinian child detainees represented by DCIP’s lawyers in Israel’s military courts. No documents were left in the office to give any indication of the reason for the raid, and they did not leave behind any receipt of materials seized.