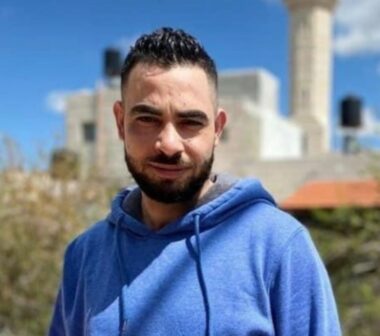 Hasan Abed-Rabbo, the Commission of Detainees and Ex-Detainees Affairs spokesperson, said that Administrative Detainee Raed Rayyan, 47, held by Israel without charges or trial, is continuing the hunger strike for the 80th day, protesting his continued imprisonment.

Abed-Rabbo said that Rayyan, 27, from Beit Duqqu northwest of occupied Jerusalem, is held at the infamous Ramla Prison Clinic, which lacks basic supplies and specialists, and is facing serious deficiencies in minerals, vitamins, and proteins in addition to a dangerous weight loss.

He added that Rayyan is frequently dizzy, repeatedly vomiting, and has constant pain all over his body, especially the abdomen area, his joints, and limbs, adding that his condition is gradually declining.

Abbed-Rabbo stated that Rayyan spent nearly two months in solitary confinement, an issue that caused deterioration in his health.

Despite his serious condition, the detainee is determined to continue his strike until reaching an agreement ending his arbitrary Administrative Detention without charges.

It is worth mentioning that another detainee, Mohammad Nuwwara, suspended the hunger strike two days earlier after an agreement was reached to end his 11-month solitary confinement and move him to a different prison.

In related news, the Israeli Authorities issued a new four-month Administrative Detention order against Khalil Awawda, 40, from Ethna town northwest of the southern West Bank city of Hebron, shortly after he suspended the hunger strike, which lasted for 111 days.

The new order against the detainees was issued just three days before his current order was supposed to expire.

It is worth mentioning that 640 Palestinian Administrative Detainees continue the boycott of Israel’s military courts to protest their continued detention without charges, especially since these courts keep renewing existing orders or issuing new ones with deliberations or charges.