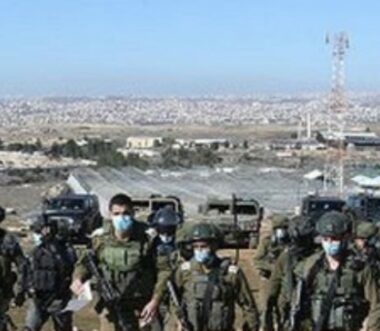 On Wednesday, Israeli soldiers targeted many Palestinian homes with live fire during training in Masafer Yatta, south of Hebron, in the southern part of the occupied West Bank.

Fuad al-Amour, the coordinator of the Protection and Steadfastness Committees in Masafer Yatta and Southern Hebron Hills, said the soldiers targeted the homes with live fire in the Khallet ad0-Dabe’ area in Masafer Yatta, causing damage to at least four homes.

The live Israeli army fire destroyed and damaged ceilings and walls of at least four homes owned by Palestinians from the Dababsa family and caused anxiety attacks among many Palestinians, especially the children.

Al-Amour said that the army started, several days ago, the live-fire drills in Be’er al-Qitt, the al-Halawa community, and several dwellings in Masafer Yatta where Israel has been trying to displace the families and use their lands for military purposes and its illegal colonialist activities.

Earlier this year, the Israeli High Court denied an appeal filed by Palestinians from twelve communities in Masafer Yatta after the Israeli occupation army designated these areas as “live-fire training zones,” an issue that paves the way for demolishing these communities and displacing the families.