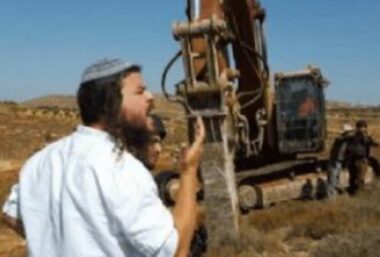 A group of Israeli colonists, illegally squatting on Palestinian lands, invaded privately-owned farmlands, in the eastern meadows’ area of Bethlehem, Wednesday, and plowed them as part of their constant attempts to confiscate them.

Hasan Breijiyya, the head of the “Wall and Colonization Resistance Commission” in Bethlehem, said dozens of colonists invaded the lands, and started plowing them, and added that the farmlands are owned by Palestinians from the az-Zawahra and al-Wahsh families.

He also said that the colonists started plowing the Palestinian lands in Khallet al-Batm and Shu’ab as-Saff areas, east of Bethlehem, and added that Israeli soldiers were extensively deployed in the area.

The official warned that Israel has been escalating its violations and attempts to illegally annex more Palestinain lands, including when the army allows the colonists to invade, plow and destroy farmlands, and use them as grazing areas for their livestock.

Breijiyya added that the soldiers facilitate the theft of Palestinian lands for the benefit of construction and expanding the illegal colonies, built in direct violation of International Law and the Fourth Geneva Convention.

In related news, many Palestinian farmers managed to fend off an attack by colonialist settlers, who invaded their lands in the al-Ma’sara village, south of Bethlehem in the West Bank.

The Palestinians managed to remove the invading colonists from their lands, especially when the Israeli assailants brought their sheep into the farmlands to destroy the crops the Palestinian farmers have been planting.

Breijiyya said the Israeli colonists, and the soldiers, have recently escalated their violations against the Palestinian villagers, their homes, and lands, in many communities in Bethlehem.

In related news, Israeli soldiers uprooted large swaths of Palestinian lands in the southern West Bank governorate of Hebron, to expand an illegal colony, and abducted a man who tried to prevent the army from uprooting his land.