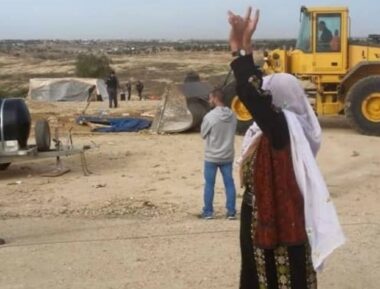 On Monday morning, Israeli soldiers invaded the al-Arakib Bedouin village in the Negev and demolished it for the 203rd time.

Several Israeli police and military vehicles invaded the village and demolished its dwellings and barns, displacing twenty-two families and their livestock.

Al-Araqib is a Palestinian village located to the north of the city of Beersheba in the Negev desert (southern Palestine). It was established for the first time during Ottoman rule. It is one of the 51 Arab villages in the Negev that the Israeli government does not recognize.

And the occupation authorities have worked since 1951 to expel its residents with the aim of controlling their lands, through extensive house demolitions, to control the vast lands that are equivalent to two-thirds of historic Palestine.

The village was completely demolished by Israeli bulldozers on July 27, 2010; Israeli troops demolished all its homes and displaced hundreds of its residents, under the pretext of building without a permit.

The steadfastness of Al-Araqib became a symbol of the battle of wills waged by the Palestinians of the occupied interior, especially in the Negev, in order to survive and preserve land and identity from the policies of Judaization.

The Israeli occupation authorities do not recognize their ownership of the lands of these villages and communities, refuse to provide them with basic services such as water and electricity, and try by all means and methods to push the Palestinian Arabs to despair and frustration to uproot and displace them.