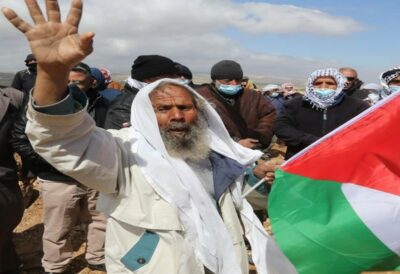 On Wednesday, the Palestinian Ministry of Foreign Affairs issued a statement condemning Israeli authorities for failing to investigate the death of 75-year old Sheikh Suleiman al-Hathlin in what appeared to be a vehicular ramming attack by an Israeli settler two weeks before.

The well-known and well-loved Muslim religious leader was hit by a car and seriously injured on January 5th in Khirbet Umm al-Khair, east of Yatta town, south of Hebron. He died from his wounds on January 17th, and thousands of Palestinians attended his funeral.

The Ministry of Foreign Affairs condemned the fact that despite two weeks having passed since the vehicular assault, the Israeli authorities have failed to interview any of the numerous eyewitnesses who were present at the scene and have come forward offering to testify as to what they saw. In addition, the Israeli authorities failed to collect the numerous videos that documented the crime from security cameras near where he was killed, as it was a populated area with several cameras.

The Ministry stated that the behavior of the Israeli government reflects the extent of the spread of racism and fascism in the Israeli occupation government in its decision-making bodies against the Palestinian people and their identity.

It stated, “If the perpetrator of the run-over operation was a Palestinian or if his vehicle veered in any direction as a result of a traffic accident, the occupation soldiers and police would rush, as they often do in these situations, to shoot with the aim of killing the Palestinian involved, even if he clearly did not pose any significant danger to the occupation soldiers. In every case where a Palestinian is even suspected of ramming an Israeli with a vehicle, the Israeli military government that rules all aspects of life in the West Bank deploys soldiers and officers on the roads and their intersections. The military then sends soldiers to military roadblocks, towers, and iron gates erected and at the entrances to Palestinian cities, villages, towns and camps, further punishing and harassing Palestinians”.

The Ministry of Foreign Affairs condemned in the strongest terms this official Israeli behavior and considered it an explicit recognition by the occupying power of its racism and perpetration in committing more crimes and encouraging the killing of more Palestinians. The Ministry said this shows the resounding failure of the allegations of Israeli leaders claiming that the Israeli occupation army is somehow moral. On the contrary, they stated, the failure to investigate the settler who ran over Sheikh Al-Hathalin is a crime in itself for which international law must hold Israel accountable.

The Ministry of Foreign Affairs called on the UN Security Council, the Secretary-General of the United Nations and international and international officials to take action in the wake of the occupation’s racism and its abhorrent discriminatory measures against Palestinian civilians. They added that the  judiciary in Israel is an integral part of the occupation system itself.

Sheikh al-Hathlin was known as someone who always believed in the unity of the people and the land. The family was displaced from ‘Arad town in Be’er Saba in 1948, and moved to Umm al-Khair, near Yatta in Hebron. They were refugees with no land until his father was able to buy land in the village in 1965. However, Israel illegally annexed Palestinian lands, including part of Suleiman’s land, and built the illegal Karmiel colony in the year 1980, and has since been expanding it by further theft of land.

The Israeli army previously demolished Suleiman’s home, after alleging it was close to Carmiel colony which was built on stolen Palestinian lands.

Throughout his life, Sheikh al-Hathlin devoted himself to Palestinian unity and steadfast, non-violent resistance to the Israeli military occupation and theft of Palestinian land. He never associated himself with any one political party or faction, and called for unity among the Palestinian people.

Palestinian civil society groups and legislators joined the call for an investigation of the suspicious killing of Sheikh al-Hathlin.