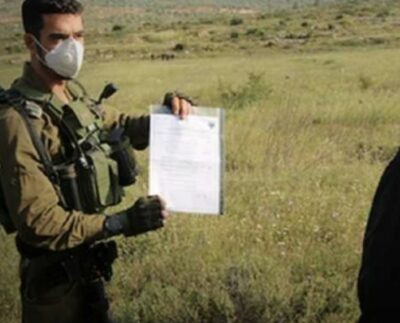 NABLUS, Monday, November 29, 2021 (WAFA) – The Israeli occupation authorities today ordered a halt on the construction of twenty-two houses in Qusra village, southeast of Nablus, according to local sources.

Deputy head of the village council, Imad Jamil, said that Israeli forces delivered stop-construction orders against twenty-two houses besides to a demolition order against an agricultural shed in the village.

Soldiers in the oxymoronically named Civil Administration determine where Palestinians may live, where and when they may travel (including to other parts of the occupied territories like Gaza and East Jerusalem), whether they can build or expand homes on their own land, whether they own that land at all, whether an Israeli settler can takeover that land among others.