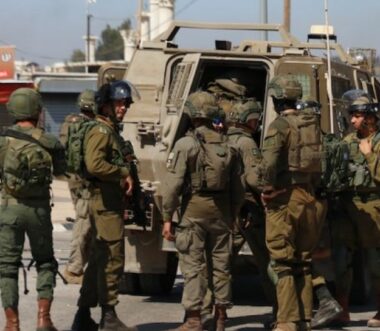 Israeli soldiers attacked, on Saturday at night, many Palestinian protesters near the al-Jalama military roadblock, northeast of Jenin, in northern West Bank.

Media sources said dozens of Palestinians marched towards the roadblock while chanting against the ongoing illegal Israeli occupation, its escalating violations against the Palestinians, including the political prisoners.

They added that the soldiers fired many gas bombs, concussion grenades, and rubber-coated steel bullets at the protesters; there have been no immediate reports of injuries.

On Saturday at night, the soldiers abducted four young Palestinian men after Israeli colonialist settlers assaulted them along with three women, in Hebron city, in the southern part of the occupied West Bank.