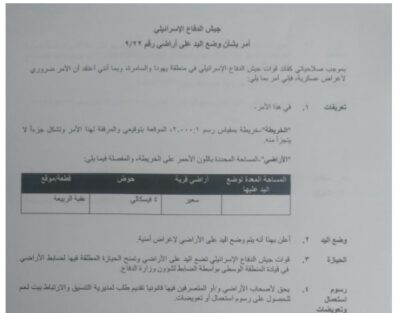 On Monday, the Israeli occupation army illegally annexed Palestinian lands in Sa’ir town, north of Hebron, in the southern part of the occupied West Bank.

Hasan Breijiyya, the head of the Bethlehem office of the Wall & Colonization Resistance Commission, said the army issued orders illegally confiscating Palestinian lands in Basin 4 in the Aqabat ar-Rabee’a area in Sa’ir.

He added that the army annexed the privately-owned Palestinian lands to expand the Wad Sa’ir Street used by the illegal colonizers.

Breijiyya also said that the annexation would lead to uprooting dozens of Palestinian trees on both sides of the street.