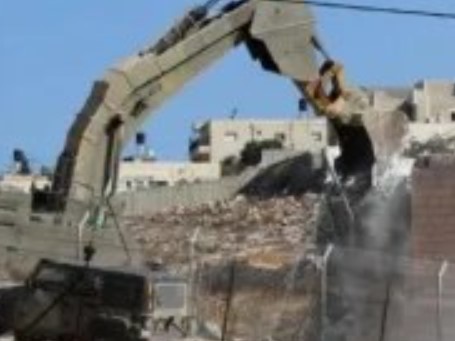 On Wednesday, Israeli soldiers demolished a Palestinian home in the Al-Khader town, south of Bethlehem, in the occupied West Bank.

Mousa added that the army claimed the property in the Baten Al-Ma’si area was built without a permit from the “Civil Administration Office,” the administrative branch of the illegal Israeli occupation.

The Israeli army recently escalated its violations in Ban Al-Ma’si and Um Rokba areas in Al-Khader by demolishing several homes and structures and issuing more demolition and halt construction orders.

In June, Israeli soldiers invaded the Jabal Abu Sood area in the Al-Khader town and handed the Palestinians orders to halt the construction of twelve homes.

Al-Khader is subject to constant Israeli violations, including invasions, demolishing homes and property, and uprooting the town’s lands.

Numerous Palestinian homeowners have faced the demolition of their homes, barns, and other buildings by the Israeli military and the forced takeover of their land as part of the effort to displace the indigenous Palestinian population to allow for Israeli colonization.