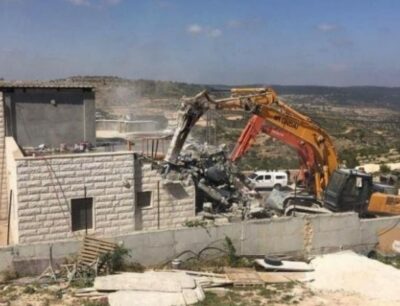 On Wednesday, Israeli soldiers demolished a Palestinian home in the al-Walaja village, west of Bethlehem, in the occupied West Bank.

Local nonviolent activist Ibrahim Awadallah said several army jeeps and bulldozers invaded the Ein Jweiza area in the northern part of the village and demolished one home, allegedly for being built without a permit from the Israeli occupation authorities.

Awadallah added that the home, 90 square/meters, was recently built by Ahmad Nidal Barghouth, who was preparing to move into his new property with his family.

Ein Jweiza has been subject to escalating Israeli violations that included demolishing homes and structures, including farms, sheds, and retaining walls.

The Israeli army also repeatedly invades and bulldozes Palestinian farmlands in the area to benefit the illegal colonialist activities.

Related: “Half Of Al-Walaja Homes Face Threat Of Demolition”

The Israeli violations against al-Walaja started in the 1980s when Israel implemented its plans to annex the Palestinian lands to build its illegal colonies, by denying all construction permits filed by the Palestinians, in addition to dividing the lands, zoning, and designating large areas as “green zones,” to prevent the Palestinians from using them, not to mention surrounding them with the illegal Annexation Wall.

Al-Walaja is already surrounded by the illegal colonies on Gilo, Har Gilo, Givat HaMatos, and Har Homa, which were all built on stolen Palestinian lands, in addition to the large areas of lands that were annexed when Israel paved roads leading to these colonies, installing railways, and designating lands as natural reserves, off-limits to the Palestinians.