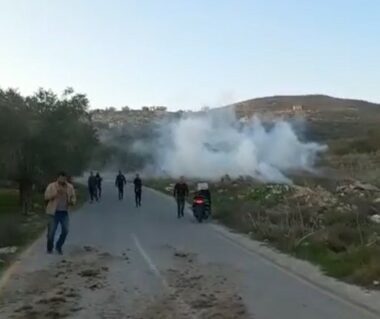 Israeli soldiers injured, Tuesday, several Palestinians during protests that erupted when the army invaded the main road of Burqa town, northwest of the northern West Bank city of Nablus.

Ghassan Daghlas, a Palestinian official who monitors Israel’s illegal colonialist activities in northern West Bank, said the soldiers closed the main road leading to the town and prevented the Palestinians from crossing.

He added that several young Palestinian men hurled stones at the invading soldiers who fired many rubber-coated steel bullets and gas bombs.

Medical sources said dozens of Palestinians suffered the effects of tear gas inhalation, including many in their homes and shops.

In addition, the soldiers closed the Beit Furik roadblock, east of Nablus, after alleging that they heard gunshots in the area, prevented the Palestinians from crossing, and invaded Rojeeb nearby village.

It is worth mentioning that the soldiers have been carrying out illegal ongoing collective punishment measures against Burqa, including storming and searching homes and stores in addition to abducting and injuring many Palestinians, after an Israeli colonialist settler, identified as Yehuda Dimantman, 20, was killed, on December 16, 2021, by Palestinians who opened fire at his car, near the evacuated Homesh colonialist outpost, which was built on Palestinian lands north of Nablus.