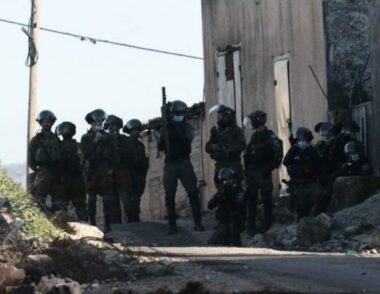 Local sources said several army jeeps invaded the village, leading to protests before the soldiers fired live rounds, rubber-coated steel bullets, and gas bombs at the protesters and nearby homes.

They added that two Palestinians were shot with rubber-coated steel bullets and received the needed treatment, adding that several Palestinians suffered the effects of tear gas inhalation.

During the invasion, the soldiers destroyed a main water line in Kufur Qaddoum, in addition to closing two streets with rocks and sandhills.

In related news, the soldiers installed two roadblocks in Rommana village, and the main entrance of Silat al-Harithiya, near the northern West Bank city of Jenin, leading to protests.

The soldiers stopped and searched dozens of cars and interrogated many Palestinians while inspecting their ID cards. Dozens of soldiers were also deployed around many villages and towns in the Jenin governorate.