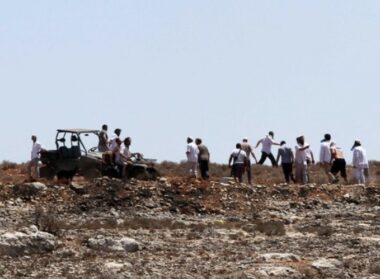 On Saturday night, a group of fanatic illegal Israeli colonizers bulldozed large areas of Palestinian agricultural lands in Burin town, south of Nablus, in the northern part of the occupied West Bank.

Ghassan Daghlas, a Palestinian official who monitors Israel’s illegal colonialist activities in the northern West Bank, said the colonizers brought many bulldozers and started bulldozing and uprooting the Palestinian lands near the illegal Yitzhar colony.

Daghlas added that the lands are part of six villages and towns south of Nablus and are subject to escalating Israeli violations amidst the increasing construction and expansion of the illegal colonies.

The lands have been surrounded and isolated, and their Palestinian owners have been denied access.

In related news, Israeli soldiers closed the Huwwara and Beit Furik military roadblocks and prevented the Palestinians from entering Nablus, after forcing the cars and residents to leave.