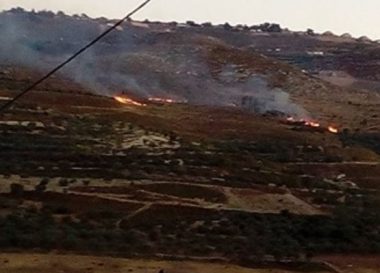 The Coordinator of the Popular and National Committee in southern Hebron, Rateb Jabour, said the assailants came from the illegal Ma’on colony, which was installed on illegally-confiscated Palestinian lands.

He added that the colonizers burnt nearly thirty Dunams of farmlands in Khallet al-Adra, near the illegal colony, and that the lands were planted with winter produce.

The lands are owned by members of Shawaheen family, who use them for agriculture and as grazing areas for their livestock.

On Tuesday at dawn, the soldiers abducted at least twelve Palestinians, and injured one, during massive invasions in several parts of the occupied West Bank, the Palestinian Prisoners’ Society (PPS) has reported.