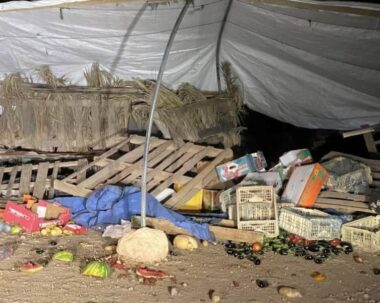 Aref Daraghma, a local nonviolent activist against Israel’s colonialist activities, said dozens of colonizers gathered on main roads in the Northern Plains of the Jordan Valley in the West Bank and closed the main entrance of Ein Al-Baida village.

The colonizers also caused damage to greenhouses at the entrance of Ein Al-Baida in addition to attacking street vendors and destroying their tables and produce.

Furthermore, several colonizers invaded the Al-Farisiyya village in the Northern Plains and gathered near many tents before threatening to shoot and harm workers and farmers.