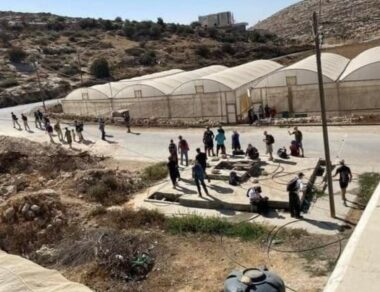 On Friday, a group of illegal colonizers invaded the water springs area near the Al-Alqa village, south of Hebron, in the southern part of the occupied West Bank.

Media sources said the colonizers, accompanied by many Israeli soldiers, invaded the springs area after the army isolated it to prevent the Palestinians from reaching it.

They added that the colonizers came to the area in cars and buses and were accompanied by several Israeli military jeeps.

In related news, the soldiers invaded the Al-Jawaya area, east of Yatta, south of Hebron, before confiscating a power generator and construction supplies owned by Mamdouh Da’ajna.

Fuad Al-Amour, the coordinator of the Protection and Steadfastness Committees in Southern Hebron, said a paramilitary colonizer first invaded the area and took pictures before calling the soldiers.