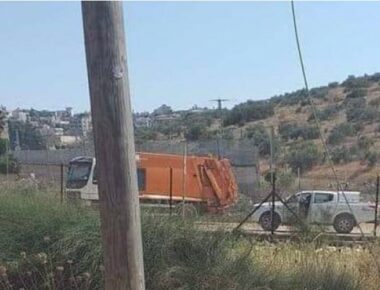 Illegal Israeli colonizers released, Sunday, many cows to feed on Palestinian agricultural lands in the Wadi al-Maleh area, in the Northern Plains of the occupied West Bank.

Aref Daraghma, a Palestinian researcher and human rights activist, said the colonizers release more than twenty cows on the Palestinian lands in the Khirbat al-Hadidiya and Khallet Makhoul in Wadi al-Maleh.

He added that the colonizers frequently attack the Palestinian lands in the area, including when they started releasing their livestock into the farmlands three years ago.

The attacks also target the Palestinians, their homes, and structures, as part of the ongoing attempt to force them out of their lands and meadows.

In related news, Israeli soldiers confiscated a municipal garbage truck serving the village of Masha and Zawiya, in the central West Bank governorate of Salfit.

Eyewitnesses told WAFA Palestinian News Agency that the soldiers forced the driver, Taha Abu Hamada, to drive into a nearby illegal Israeli colony, adding that the driver remained detained in the colony after the army confiscated the truck.