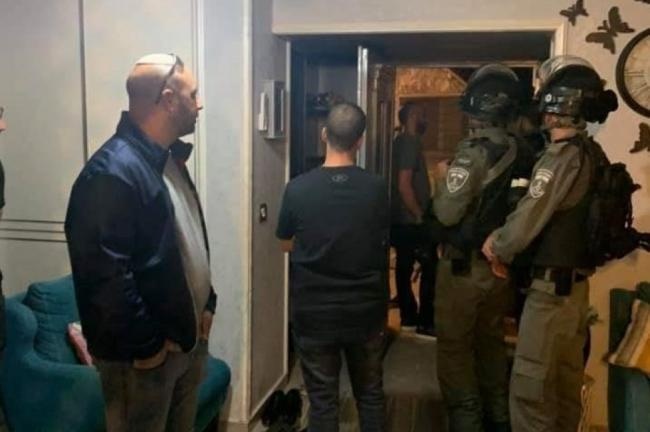 On Sunday evening, Israeli forces invaded the home of the governor of Jerusalem, Adnan Ghaith, in the town of Silwan, south of the Al-Aqsa Mosque.

This is the second time this month that Israeli forces have stormed the house of Governor Ghaith, with the first time being on August 8th.

Governor Ghaith has been arrested 35 times since assuming his duties as governor of Jerusalem in August 2018. Israeli forces have subjected him to a campaign of prosecution, arrest, and prevention of participation in meetings or meeting Palestinian figures. They have also prevented Governor Ghaith from traveling or leaving occupied Jerusalem.

It is noteworthy that an Israeli military Court issued a decision on August 4, imposing house arrest on Governor Ghaith, without specifying a time period for the decision.

According to the European Council on Foreign Relations, Ghaith was the Fatah movement’s secretary in Silwan and one of the leaders of the People’s Committee in the al-Bustan neighbourhood of Jerusalem — which has led local opposition to the “City of David” archaeological-tourist park.

The non-profit organization Ir-Amin notes, “Similar to cases of settlements in the heart of Palestinian neighborhoods, national parks are also an arena in which state authorities have joined hands with private bodies, with the state transferring administration and development powers for public, touristic, archaeological and educational projects into the hands of right wing private organizations. Frequently, representatives of the organizations participate in the planning of the projects and even initiate them, and people who previously worked for them serve in senior positions in public bodies that are responsible for those projects, such as Israel Nature and Parks Authority. For example, the Elad organization, the biggest and most prominent of the right wing organizations, operates the City of David National Park, an educational project in the Tzurim Valley National Park, a project in the Peace Forest and the information center in the Mount of Olives cemetery, while also endorsing archaeological excavations in the entire area of Silwan.

“Archaeological excavations and tourism development are frequently undertaken and/or underwritten by the right-wing organizations, which in turn use them to justify their activity and disseminate and impose their historic narrative of Jerusalem through extensive educational activity. The narrative in question derives pronounced political and nationalist conclusions from historic Jewish presence, while covering up the diversity and wealth of cultures that existed in Jerusalem through its thousands of years of history. By-and-by, this awareness delegitimizes any non-Jewish presence in the city. The Education Ministry, the Defense Ministry, the Jewish Agency, and other bodies send hundreds of thousands of schoolchildren, soldiers, officers and college students from Israel and abroad to participate in educational projects operated by right-wing organizations in East Jerusalem, who in turn provide visitors with a story that binds history, heritage and politics in one. A visit to these tourist sites provides a comfortable setting for establishment of Israeli presence in East Jerusalem and at the heart of Palestinian neighborhoods, while ignoring its political implications.”