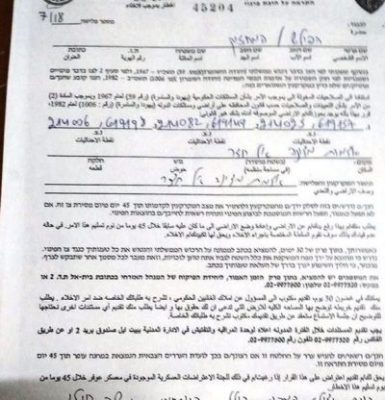 Ahmad Salah, the coordinator of the Popular Committee against the Annexation Wall and Colonies in al-Khader, said the Palestinians found the military orders placed on their lands.

Salah added that the orders also instructed the Palestinians that they have 45 days to file appeals against the military orders.

The orders addressed each land owner by name, requiring them to evacuate from their lands, otherwise the military will take over by force. Salah also aid that the Palestinians were given the option to file appeals within 30 days, with the “Absentee Property Office,” explaining “the reasons for the appeals, accompanied by maps and deeds, to claim ownership rights.”

The Palestinian can also file appeals with the special court in Ofer military base, near Ramallah, in central West Bank.

It is worth mentioning that such orders are rarely overturned by any Israeli court, and the lands are used by for the construction and expansion of illegal colonies in the occupied West Bank, and for military considerations, in direct violation of International Law, the Fourth Geneva Conventions and various international resolutions and treaties.