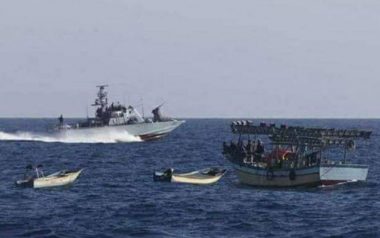 Media sources said the navy fired many live rounds and gas bombs at the fishing boats and attacked them with water cannons, causing damage.

The sources said the intensity of the navy’s live rounds fired at the fishing boats forced the Palestinians to leave and return to the shore.

The attacks occurred in Palestinian waters in the al-Waha area, northwest of Gaza city, the as-Sudaniyya area west of Jabalia, and near Beit Hanoun, in the northern parts of the coastal region.

On Thursday evening, Israeli navy ships attacked Palestinian fishing boats near the shore, in the southern parts of the Gaza Strip.