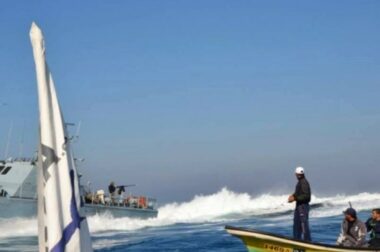 On Thursday, Israeli navy ships attacked Palestinian fishing boats near the shore of Gaza city, in the besieged coastal region, wounding a fisherman.

The sources added that the soldiers shot Mubarak Bakr with several rubber-coated steel bullets before he was rushed to the Shifa Medical Center for treatment.

Furthermore, Israeli soldiers fired many live rounds and gas bombs at Palestinian farmers on their lands east of the Tuffah neighborhood, east of Gaza city, and east of Khan Younis, in the southern part of the coastal region.

Last Thursday evening, Israeli soldiers abducted a Palestinian at the Beit Hanoun (Erez) Crossing in the northern part of the Gaza Strip.

On Thursday morning, Israeli navy ships attacked several Palestinian fishing boats in Gaza, forcing them to leave. The attack was the second in the two areas since Tuesday.