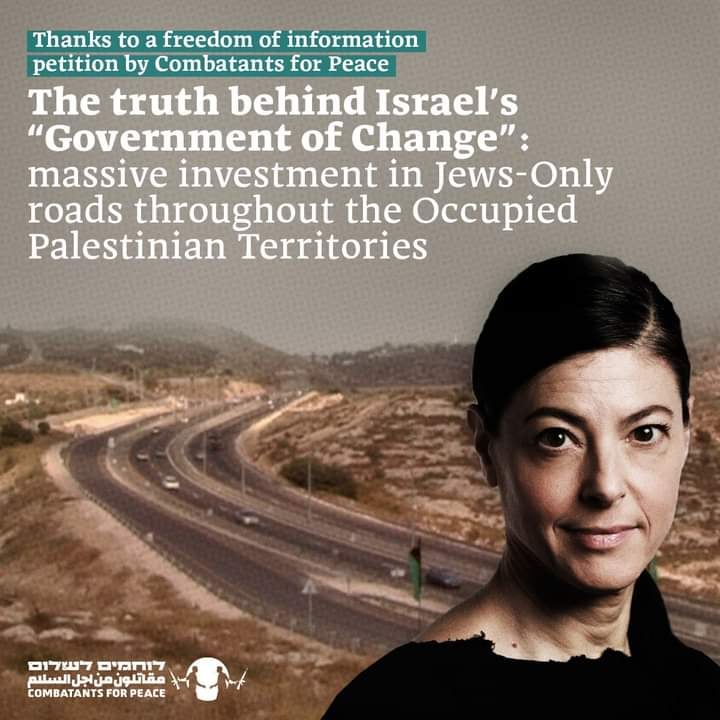 The Israeli-Palestinian peace group ‘Combatants for Peace’ has revealed, through a Freedom of Information petition, a massive Israeli government investment in ‘Jewish-only’ roads through the West Bank.

The petition was filed by Adv. Eitay Mack on behalf of Combatants for Peace. It exposed that the Israeli Ministry of Transportation, headed by Minister Merav Michaeli, leader of the Israeli Labor Party, is investing hundreds of millions of shekels in paving “bypass roads” designed for Jews-only in Area C of the West Bank.

Despite Michaeli having stating in the past that she opposes the pavement of Israeli settler roads in the West Bank, in her role as Minister of Transportation she is doing exactly that. The Combatants for Peace group notes that this supposed leftist leader is investing in settlement roads at a much higher rate than the last two Transportation Ministers — both of whom were from right-wing parties.

From the information the group received from the Ministry in response to their Freedom of Information request, they found that Michaeli approved the continued paving of two roads for Jews-only: the Al-Arroub bypass and the Huwara bypass. The estimated cost of these two roads came to more than half a billion shekels. In addition, she approved the construction of two more “bypass” roads: the Hizma bypass road, that will connect the settlements in the Ma’ale Adumim area to Road 443, and the al-Walaja bypass road, which is intended to double the number of settlers in the Gilo Settlement.

All of the roads in question are built on Palestinian land that was seized from the Palestinian owners without consent or compensation, and the roads are being used to colonize and take over large swaths of the West Bank (which is Palestinian land), and annex these lands to the state of Israel.

This colonization and annexation is being done in direct violation of international law and signed agreements, but Israeli officials continue to approve and carry out these actions with complete impunity, and little to no response from the international community.

The construction of the roads by the so-called “Government of Change” follows decades of colonization by right-wing Israeli paramilitary forces in an effort to seize more land in Area C, in a way that will make a future resolution of the conflict impossible.

‘Area C’ was one of the areas established under the Oslo Accords in 1993, which was meant to bring about an end to the conflict. ‘Area C’ lands were supposed to be returned to Palestinian control within five years of the agreement – by 1998. But that never happened, and in 2000, the second intifada broke out following Israel’s continuous and blatant disregard for the peace agreement they had signed.

In response to the discovery of settlement road investments, Combatants for Peace said in their statement, “This is the truth behind Israel’s ‘Government of Change’: a deepening of the occupation by massive investments in Jews-only projects throughout the Occupied Palestinian Territories. So, we wonder: What kind of change does the ‘Government of Change’ bring?”

In their statement, the Combatants for Peace also stated, “We call on Minister Michaeli to stop paving these roads. Instead of serving the agenda of the far-right, and expanding the settlements, Michaeli should stop the Ministry of Transportation’s investments in Area C, and transfer those hundreds of millions of Shekels to the development of better transportation inside Israel, for the benefit of the citizens of Israel, and not for the benefit of the settlement enterprise.”