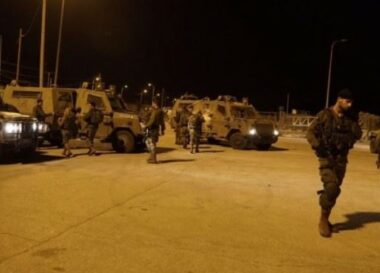 On Friday evening, Israeli soldiers abducted four Palestinians while crossing a military roadblock near Tulkarem in the northern part of the West Bank.

Media sources said the soldiers, at the Ennab military roadblock east of Tulkarem, stopped and searched dozens of cars and interrogated many Palestinians while inspecting their ID cards.

They added that the soldiers abducted four young men, Anas Anbar, Hamada Mosye’ie, Bassel Salem, and Ahmad Sudani, and took them to an unknown destination.

Also Friday, Israeli soldiers injured many Palestinians during the weekly procession against the illegal colonies in Beita and Beit Dajan, near Nablus.

In related news, Israeli soldiers caused several Palestinians to suffer the effects of tear gas inhalation in Al-Jalama and Faqqu’a town, northeast of Jenin, after the army invaded the two communities and conducted searches, leading to protests.

The soldiers also injured many Palestinians during the weekly procession in Kufur Qaddoum town, east of Qalqilia, in the northern part of the occupied West Bank, and wounded several others in Hebron, in the southern part of the West Bank.