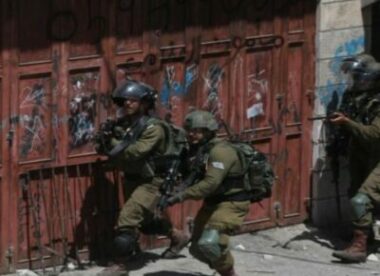 On Saturday dawn, Israeli soldiers abducted at least twenty Palestinians, including a journalist, former political prisoners, and political leaders of the Islamic Jihad movement, from their homes in several parts of the occupied West Bank.

The soldiers also invaded Sanur village, south of the northern West Bank city of Jenin, searched homes, and abducted Najeh Habayba, in addition to Bilal Nabil Thiab, his brother Allam, and Jamal Sayyed, from their homes in Kafr Ra’ey village, and Omran Ghawadra from his home in Bir al-Basha village, southwest of Jenin.

The soldiers also invaded the home of former political prisoner, Bassam Thiab, in Kafr Ra’ey, but couldn’t fine him and informed his family that he must turn himself in to the army or be assassinated if he doesn’t.

In Hebron, in the southern part of the West Bank, the soldiers a former political prisoner, Rami al-Kassar, 43, from his home in Kharas town, northwest of Hebron, Nidal al-Jeyyawi, Ramer Sleimiyya, and Mohammad Yousef al-Fseisi from Ethna town, Nasser Zein and his son Yahia from Hebron city, and Zakariyya al-Heeh from Surif town, northwest of Hebron.

In Qalandia refugee camp, north of the occupied capital, Jerusalem, the soldiers abducted a former political prisoner, Mousa Jahjouh, in addition to Essam Abu Esba’, and Mousa Jahjouh from their homes.

In Tulkarem, in the northern West Bank, the soldiers abducted Ala’ Yousef Shabrawi from his home in the Nur Shams refugee camp.

In Tubas, in the northeastern West Bank, the soldiers abducted a former political prisoner, Emad Bani Odah, 38, from Tammoun town, south of the city, after stopping him at a military roadblock.

On Friday, Israeli soldiers launched an offensive on the Gaza Strip that has so far killed 10 Palestinians, including a commander in al-Quds Brigades “Islamic Jihad’s military wing” and three civilians: a woman killed in her house and a girl killed near her house.  Also, 48 other Palestinians, including nine children and four women, were injured; most of them were civilians, the Palestinian Center for Human Rights (PCHR) confirmed.