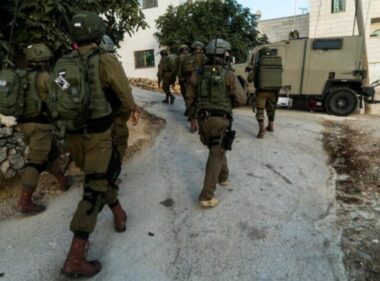 In Nablus, in the northern West Bank, the soldiers stormed and ransacked homes in several parts of the governorate and abducted five Palestinians.

Also, the soldiers injured many Palestinians near the Beit Furik military roadblock, east of Nablus.

In addition, many paramilitary illegal Israeli colonizers attacked a Palestinian school in Huwwara town, south of Nablus, and injured at least three children.

In Jericho, in the northeastern West Bank, the soldiers invaded the Ein al-Sultan refugee camp and abducted Hamza Hdeib from his home.

In the southern part of the West Bank in Hebron, the soldiers searched several homes before abducting Ahmad Mahmoud Abu Najma and Rif’at Ala’ Abu Najma.

In occupied Jerusalem, the soldiers assaulted a young man, whose name remained unknown, at the light rail station and abducted him, the Al-Qastal News said.