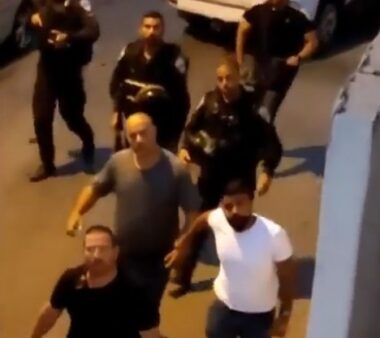 During the invasion of Ya’bad, the soldiers fired live rounds, rubber-coated steel bullets, and gas bombs at Palestinians protesting the invasion and stormed the home of a political prisoner, Monadel Erfei’at.

All schools in Jenin and Jenin refugee camp were shut down due to Israeli military invasions.

Furthermore, the soldiers closed the Al-Jalama and Salem military roadblocks, near Jenin.

In occupied Jerusalem, the soldiers invaded the At-Tour town east of the city, searched homes, and abducted a young man, Amir Hazim Sayyad.

In Hebron, in the southern part of the West Bank, the soldiers abducted a teenage boy, Montaser Ra’ed Abu Rmeila, after assaulting and wounding him.

Also, illegal Israeli colonizers attacked many Palestinian cars near the Beit El military roadblock northeast of the Al-Biereh city, in the central West Bank, causing damage to at least one car.

In related news, the soldiers and personnel of the so-called “The Israel Nature and Parks Authority” invaded a Bedouin community in the Northern Plains of the occupied West Bank and confiscated several cows.

In the Gaza Strip, Israeli navy ships fired many live rounds at Palestinian fishing boats near Rafah shore, in the southern part of the besieged coastal region.