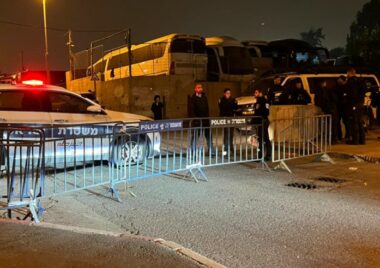 Israeli soldiers assaulted, on Wednesday evening, many Palestinians in Sheikh Jarrah neighborhood, in the occupied Palestinian capital, Jerusalem, in the West Bank.

Media sources said dozens of soldiers and police officers invaded the neighborhood, and attacked many Palestinians, especially young men, to force them to leave, wounding at least four who were assaulted and maced with pepper spray.

The sources added that the soldiers closed all roads leading to the neighborhood, and prevented the Palestinians, solidarity activists, and journalists from entering it.

The WAFA Palestinian News Agency said the soldiers attacked the Palestinians and isolated the neighborhood to allow groups of illegal colonialist settlers to march there.

WAFA added that the colonizers, under heavy police and military protection, marched while carrying Israeli flags and chanting “death to Arabs,” before the locals tried to stop them, especially when they invaded a residential neighborhood.

Israeli soldiers then invaded the building and attacked the Palestinians, instead of removing the colonizers.

It is worth mentioning that several fanatic Israeli right-wing groups called for processions in Sheikh Jarrah, to “support the settlers in Shimon HaTzadik” colonialist outpost in the Palestinian neighborhood.

After the attack, Israeli soldiers removed the protest tent that was installed in solidarity with the al-Kurd family, in Sheikh Jarrah, six months ago, after Israeli ordered their eviction and removal from their home.

The soldiers also removed posters that include the names of all families that are still facing the threat of displacement by Israel for the benefit of the illegal colonialist settlers.

Earlier Wednesday, an Israeli colonialist settler was stabbed reportedly after a Palestinian teenage girl stabbed her in the Sheikh Jarrah neighborhood.