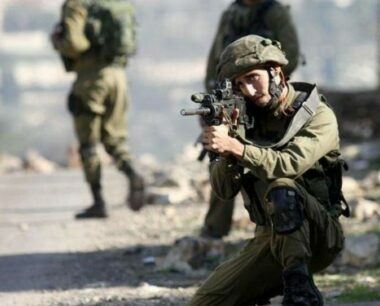 On Wednesday evening, Israeli soldiers injured a Palestinian child in the Al-Biereh city, in the Ramallah and Al-Biereh governorate, in the central West Bank, and invaded several areas in Hebron in the southern part, leading to protests.

The Palestinian Red Crescent Society (PRCS) said its medics provided treatment to a child, only 14 years of age, after the soldiers shot him with a rubber-coated steel bullet in the leg in Al-Biereh.

The attack occurred after many Israeli army vehicles invaded the Jabal At-Tawil area in Al-Biereh, and closed streets, leading to protests.

Protests were also reported after the soldiers invaded the Bab az-Zawiya and Al-Manara areas in the southern West Bank city of Hebron, in addition to Sa’ir town and Beit Einoun village, northeast of Hebron, after closing their main streets, and attacked protesters with gas bombs.

In related news, Israeli soldiers killed Ala’ Nasser Ahmad Zaghal, 21, after shooting him with a live round in the head, and injured four Palestinians, including two journalists, in Deir Al-Hatab village, east of Nablus, in the northern part of the occupied West Bank.