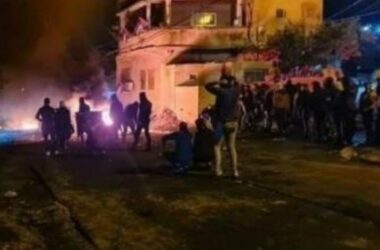 Israeli soldiers injured, on Thursday evening, dozens of Palestinians in Bazaria and Burqa villages, north and northwest of Nablus city, in the northern part of the occupied West Bank. Illegal Israeli colonizers invaded homes near Hebron, in southern West Bank.

He added that the soldiers fired many gas bombs and concussion grenades at the Palestinians, causing many to suffer the effects of tear gas inhalation, including several residents in their homes.

Daghlas also said that the soldiers fired concussion grenades at several shops, causing damage, and forcing them to close.

In addition, the soldiers invaded Burqa village, leading to protests, before shooting seven Palestinians with rubber-coated steel bullets, in addition to causing at least 34 to suffer the effects of tear gas inhalation.

Also, the soldiers attacked a nonviolent procession against the escalating assaults by the illegal Israeli colonialist settlers, including the constant attempts to annex their lands, in several areas of the Nablus governorate.

In related news, Israeli colonizers invaded Birin village, south of Hebron city, in the southern part of the West Bank, before storming and ransacking several homes, causing anxiety attacks among many Palestinians, especially the children.

The villagers then gathered in a large group and forced the invading Israeli colonizers out of their community.