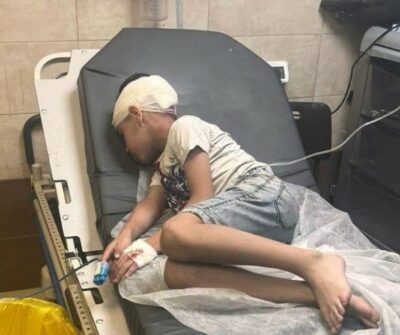 On Friday, Israeli soldiers injured many Palestinians, including a child, during processions in several parts of the occupied West Bank.

In Bethlehem, south of occupied Jerusalem, the soldiers injured a child, only eight years of age, after firing a rubber-coated steel bullet at his head.

In Hebron, in the southern part of the West Bank, the soldiers invaded Beit Ummar town, north of the city, shot a young man with a live round in the leg, and caused many to suffer the effects of tear gas inhalation.

In Jenin, in the northern West Bank, the soldiers invaded Silat ath-Thaher town, south of the city, leading to protests, and fired live rounds and gas bombs, causing many Palestinians to suffer the effects of tear gas inhalation.

The soldiers also installed roadblocks along the Jenin-Nablus roads, also near Arraba, Jaba’, az-Zawiya towns, and Anza village, before stopping and searching dozens of cars and interrogating many Palestinians while inspecting their ID cards.

The soldiers also invaded Palestinian agricultural lands and detained a child for several hours in the Al-Arqa village while he was on his family’s land.

In Ramallah, in the central West Bank, the soldiers shot two young men with live fire; one was shot in the leg, and one in the shoulder after the army invaded the al-Jalazoun refugee camp north of the city, and fired at their car.

In Qalqilia, in the northern West Bank, the soldiers attacked the weekly procession in Kufur Qaddoum town, east of the city, before shooting five Palestinians with rubber-coated steel bullets and causing many to suffer the effects of tear gas inhalation.

Furthermore, the soldiers attacked many journalists reporting on the weekly procession in the town and tried to remove them from the area.