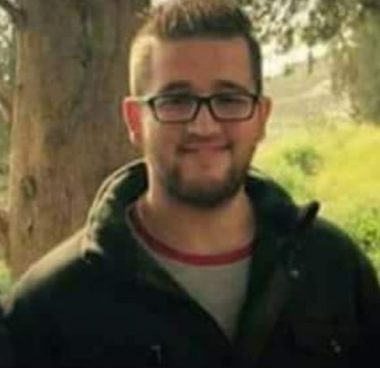 Israeli soldiers killed, on Tuesday at night, a young Palestinian man, and injured 110, including 32 who were shot with live ammunition, in Nablus city, in the northern part of the occupied West Bank.

The Palestinian Health Ministry has identified the Palestinian as Khaled Waleed Tayeh, 22, from Iraq-Tayeh village, east of Nablus.

Khaled succumbed to his wounds, after being shot with a live round in the chest; he died at the at al-Najah Hospital, in Nablus.

The Palestinian Red Crescent said the soldiers injured 110 Palestinians, including 32 who were shot with live ammunition, 26 with rubber-coated steel bullets, and 51 who suffered the effects of teargas inhalation.

It added that the soldiers also rammed one Palestinian with their jeep, causing moderate wounds. The head of the an-Najah National Hospital in Nablus, Salim al-Haj Yahia, said one of the wounded Palestinians, identified as Anwar Abu Aisha, was instantly rushed to surgery after an Israeli bullet severed the main artery in his thigh, and added that his condition is very serious.

The escalation started after dozens of soldiers invaded the Northern Mountain area, in Nablus, apparently looking for the Palestinian who killed an Israeli settler, identified as Itamar Ben Gal, 29, Monday.

Undercover forces surrounded two homes but were unable to locate and arrest the man they were reportedly looking for, and instead abducted seven Palestinians, not involved in the fatal stabbing.

The Israeli army said it was unable to arrest the “suspected stabber,” and added that the soldiers were “attacked by more than 500 young Palestinian men, who hurled stones and Molotov cocktails at them, while others exchanged fire with the soldiers.”

Media sources in Nablus said the soldiers abducted Hani Ashraf Khalfa, Nayef Tubasi, Tamer Qandeel, Eyad Abu Salha, Mos’ab al-Kawni, and another Palestinian from al-Bistami family, and one who remained unidentified at the time of this report.