Israeli Soldiers Shoot And Abduct A Palestinian Child Near Ramallah 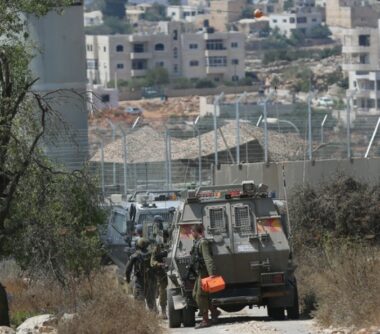 Israeli soldiers shot and abducted, on Tuesday evening, a Palestinian child near the western entrance of Silwad town, east of the central West Bank city of Ramallah.

Medical sources said the soldiers shot a child, 15 years of age, with a live round in the leg, before abducting him.

They added that the Palestinian medics tried to render the needed help to the wounded child, but the soldiers prevented them from reaching him.

The incident took place after the soldiers invaded the area, leading to protests, and fired live rounds, gas bombs, and rubber-coated steel bullets.

On Tuesday afternoon, the soldiers abducted three Palestinian children in Silwan and the at-Tour, in the occupied Palestinian capital, Jerusalem, and attacked many Palestinians; the sodliers also abducted a young man, in addition to firing gas bombs, rubber-coated steel bullets, and concussion grenades, and spraying many homes with wastewater mixed with chemicals during ensuing protests.